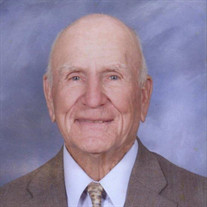 Statesboro, Georgia Mr. Waldo Emerson Colson, age 92, died Friday April 8, 2022, at the Ogeechee Area Hospice Inpatient Facility in Statesboro. The Bulloch County native was a 1947 graduate of Statesboro High School. Following his graduation, Waldo began his life-long career as a farmer. Throughout his younger years, Waldo worked with the cotton gin, soil and water conservation and raised hogs and cows. He was also a pecan farmer and was involved in pecan grower meetings in the county. Waldo was a member of Friendship Baptist Church, where he served as a deacon, member of the choir and worked with several mission trips. Waldo loved Gospel music and had played with many gospel groups throughout the area. He was preceded in death by his parents, Bartow and Gertrude Colson; two brothers, Dorsey Colson and J.B. Colson; a sister Louise Gray and his mother-in-law and father-in-law, Rufus Marsh, Sr. and Daisy Mallard Marsh. Surviving are his wife of 54 years, Betty Sue Colson of Statesboro; a brother-in-law, J.C. Marsh, Jr and wife Glenda of Statesboro and many nieces and nephews. The family will receive visitors on Sunday from 1:00pm until 2:00pm in the chapel of Joiner-Anderson Funeral Home. Funeral services will follow the visitation at 2:00pm in the chapel with Rev. Tom Osborne officiating, assisted by Rev. Bobby McFall and Pastor Thomas Hendrix. Interment will be in Bulloch Memorial Gardens. Pallbearers will be Randy Colson, Rodney Williams, Wayne Colson, Hugh Colson, Greg Anderson, Jeff Colson, Mark Johnson, Tim Erdmier and Ricky Hutchinson. Honorary Pallbearers will be the Deacons of Friendship Baptist Church. The family requests that memorial contributions be made to Ogeechee Area Hospice, P.O. Box 531, Statesboro, Georgia 30459 or Friendship Baptist Church, 4025 Friendship Church Road, Statesboro Georgia 30458. Friends may sign the online register book at www.joineranderson.com. Joiner-Anderson Funeral Home & Crematory of Statesboro is in charge of the arrangements.

The family of Mr. Waldo Emerson Colson created this Life Tributes page to make it easy to share your memories.

Send flowers to the Colson family.