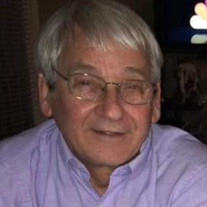 Mr. Walter Alan Lorden, age 74, died Tuesday morning, October 6th 2020 at Ogeechee Area Hospice inpatient facility following a long battle with dementia. Mr. Lorden was born in Franklin, NH on February 26th 1946 to Mr. Paul M. Lorden and Mrs. Prudence LaBarge Lorden. He lived in Sulphur, LA for many years and worked as a chemical engineer for Louisiana Pigment Co. until his retirement in 2016. He was preceded in death by both of his parents, and his sister, Cathrine Lorden. He is survived by his brother and sister-in-law, Dennis and Dorothy Lorden of Northfield, NH, his son and daughter-in-law, Patrick and Staci Lorden of Portal, GA, his son and daughter-in-law, Andrew and Xandria Lorden of Statesboro, GA, and his daughter and son-in-law, Ashton Elizabeth and Tony Grimaldi of Livonia, MI, and his grandchildren, Nathaniel, Abigail, and Victoria Lorden, of Portal, GA and Xaina and Alana Lorden of Statesboro. Several extended family members also survive. A graveside service and burial will be held on Thursday at 11:00am at Portal City Cemetery with Jon Cook officiating. The family requests that in lieu of flowers, donations be made to Ogeechee Area Hospice, PO Box 531, Statesboro, GA 30459. Friends may sign the online register book at www.joineranderson.com Joiner-Anderson Funeral Home & Crematory of Statesboro is in charge of arrangements.

The family of Mr. Walter Alan Lorden created this Life Tributes page to make it easy to share your memories.

Send flowers to the Lorden family.