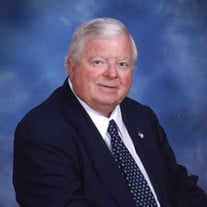 Wayne Phillip Weddon July 26, 1939 ~ April 27, 2022 Wayne Phillip Weddon, 82, loving husband, father, and grandfather passed away on April 27, 2022. He was born in Swainsboro, GA on July 26, 1939. He was the son of the late Phil and Marie Weddon. Wayne resided in Waynesboro, GA for most of his life, where he attended Waynesboro High School. After high school, Wayne proudly served his country in the U.S. Army, before returning to his hometown. He was a member of many organizations and active in community affairs in Waynesboro, including the Alee Temple Shrine Club, where he served as President in 1988, a member of the Masonic Lodge #274 for over 50 years, and he also served as Chairman of the Waynesboro Housing Authority, member and past President of the Waynesboro Lions Club, the Burke County Chamber of Commerce where he was President in 1999, member and President of the Waynesboro Downtown Development Authority, and he served as member and President of the Burke County Concert Series. Wayne thoroughly enjoyed the camaraderie of these groups, and treasured the bonds and friendships made within these brotherhoods, organizations, and community leadership groups. Lifelong ties were truly made with Wayne in his hometown. He was the type of person whom people were drawn to, with a kind heart, generous spirit, and who was always ready with a joke to make one laugh. Wayne worked as a salesman and sales manager for National Chemsearch Corporation for the majority of his life and he won many prestigious awards with them. Wayne’s career also included time with Goldberg’s Furniture, ECP Distributors, Hill Manufacturing, and Georgia Southern University. It was in Waynesboro where Wayne met the love of his life, his wife, Sheila, who pre-deceased him in 2013. He was also pre-deceased by his son, Jeffery Herrington (Jamie). Wayne and Sheila were also the parents of son Stephen Weddon (Barbara), “Little” Sheila Weddon, and Michael Herrington. They also had four grandchildren: Kiah Day (Ryan), Jordan Herrington (Tayhlor), Summer Herrington, and Savannah Herrington. They also had several great-grandchildren. Wayne also had a sister, Phyllis Drew (John) and a nephew, Phillip Drew. Wayne’s family had always been the light of his life and he had always delighted in giving advice to his children and grandchildren as they have navigated their way through this world – a task not so easy accomplished. He had always been so proud of his children, grandchildren, and his wife. In Waynesboro, Wayne and Sheila were former owners of “The Briar Patch Flowers & Gifts.” Wayne and Sheila moved to Statesboro, GA in 2005. Some of Wayne’s hobbies included collecting political memorabilia from all political parties, collecting antiques (including antique cars – he once owned a perfectly restored 1939 Plymouth), cooking “vacation breakfast” for his family in New Smyrna Beach during Summer beach trips, hunting, and traveling. Wayne and Sheila were very fortunate to have been able to travel the world, and they most frequently did this with their wonderful friends, Larry and Peggy Dye, of Evans, GA. Oh, the stories that came from these four and their trips! One could laugh for days on end at their antics – Pure belly laughs and memories made – Four wonderful friends. Over 35 of their trips were by cruise ship; however, there were many, many more, by car, rail, air, ……and who knows? Possibly by tricycle or maybe even surfboard knowing this group! He and Sheila also traveled the world with family – treasured memories never to be forgotten – and also many laughs. With Wayne around, there was always laughter. One of Wayne’s personal requests was that there be no public memorial service for him– only a private memorial service to be held at sea at a later date. Fitting, as he would not want there to be sadness. While many of us wish to say “goodbye,” and gain closure, we must honor his wishes. We take great comfort in knowing that he has been reunited with Sheila and his Lord and Savior, and that we will all see him again one day. Private service will be held at a later date. Friends may sign the online register book at www.joineranderson.com Joiner-Anderson Funeral Home & Crematory of Statesboro is in charge of arrangements.

The family of Mr. Wayne Phillip Weddon created this Life Tributes page to make it easy to share your memories.

Send flowers to the Weddon family.