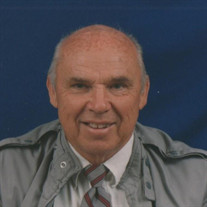 Mr. Will Rogers “Doagie” Humphrey, 88, of Sylvania, passed away on February 12, 2021 at Memorial Health University Medical Center in Savannah, GA, due to complications that developed after a recent fall. The Jenkins County native was born on November 8, 1932, to the late John Samuel and Madie Mons Humphrey. After graduating Jenkins County High School in 1952, he declined football scholarships to the University of Georgia, University of South Carolina, and Stetson University to enlist in the United States Army. During his enlistment he achieved the rank of Sergeant while serving in Trieste, Italy. After serving, he returned to Jenkins County where he was an Independent Life Insurance salesman for 12 years. He met and married his wife in 1956 and moved to Sylvania, where he was later employed by the Coca-Cola Bottling Company United in February of 1968. Serving as general manager for most of his career, he retired after 30 years. He and his family previously attended Sylvania Baptist Church. He was preceded in death by his wife, Miriam Fay Rushton Humphrey, his brothers James and Johnnie Humphrey, and sister Eloise Coursey. He is survived by his daughters and sons-in-law, Charlotte and Jeff DePalmo and Debra and Doug McClintock, both of the Charlotte, NC, area; granddaughters, Kristen Rogers (Rich) Dyer, Megan Faith (Hunter) Burns, and Madison Brianne NeeSmith; and step-grandchilden, Dylan McClintock and Nathan McClintock, all of North Carolina; his siblings, Erline (Carl) Ward of Savannah, GA and Eugene Humphrey of Waynesboro, GA; his brother-in-law D.C. Coursey of Acworth, GA; his sisters-in-law Lynn (Rick) Freeman of Sylvania, GA, Judy Kent of Millen, GA, and Ruth Crumley of Fayetteville, NC; his nieces and nephews Vanessa (Bob) Pank of Acworth, GA, Carl (Suzanne) Ward of Savannah, GA, Kelly Kent Thompson of Millen, GA, Jill (Jason) Forehand of Sylvania, GA, and Mike (Annette) Crumley of Richmond, VA; and many grand nieces and nephews. A man of many talents and avocations, he always enjoyed telling others of his experiences. His strong work ethic, a trait which he passed on to his daughters and granddaughters, is reflected in his many accomplishments. He was an outdoorsman who enjoyed spending time fishing on the local rivers and tirelessly tending his property. A self-taught carpenter, he built much of his former and current homes. He was a long-time racing fan, and for many years he was a driver and owner of a limited sportsman- class car which he raced on the dirt tracks of south-east Georgia. He was an avid fan of Atlanta Braves baseball and Georgia Bulldogs football. But most of all he loved living and working on the land on which he and his wife built their dream home outside of Sylvania. Funeral services will be held at 11am on Saturday, February 20, 2021, at the Joiner Anderson Screven Chapel. Due to Covid-19 precautions, the service will be limited to family only. The service will be live streamed via Facebook at https://www.facebook.com/groups/jafhlive/. Pallbearers will be Fletcher Robbins, life-long friend, sons-in-law Jeff DePalmo and Doug McClintock, grandsons-in-law Rich Dyer and Hunter Burns, and nephew, Carl Ward, Jr. Honorary pallbearers will be his brother Eugene Humphrey and brothers-in-law Carl Ward, Sr., D.C. Coursey, and Rick Freeman. Interment will follow at the Millen City Cemetery. Friends may sign the online register book at www.joineranderson.com. Joiner Anderson Funeral Home Screven Chapel is in charge of all arrangements.

Mr. Will Rogers &#8220;Doagie&#8221; Humphrey, 88, of Sylvania, passed away on February 12, 2021 at Memorial Health University Medical Center in Savannah, GA, due to complications that developed after a recent fall. The Jenkins County native... View Obituary & Service Information

The family of Mr. Will "Doagie" Rogers Humphrey created this Life Tributes page to make it easy to share your memories.

Send flowers to the Humphrey family.