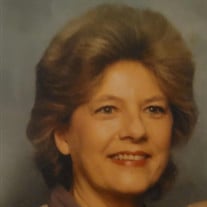 Willette Woodcock Ansley, age 84, died April 22, 2022 at Ogeechee Area Hospice, Statesboro, Georgia. A Statesboro, Georgia native and descendant of pioneer settlers of Bulloch County, she was the daughter of the late Mr. and Mrs. Wilburn Wright Woodcock of Statesboro. Ms. Woodcock graduated from Statesboro High School in 1955 and The University of Georgia with a BBS Degree in 1959. She taught school in Atlanta and Albany, GA as well as Statesboro before retiring to become a housewife, mother and volunteer community/church/school worker. She was a business woman that managed her rental properties. She was a charter member of The Statesboro Service League, DAR, Statesboro Symphony Guild, Evergreen Garden Club, One of the Founders of Bulloch Academy, Forrest Heights Country Club, Cotillion Dance Club, Pirouette Dance Club and First United Methodist Church. Mrs. Woodcock-Ansley volunteered to teach illiterate adults reading at the public library, enjoyed tennis and bridge and was a member of the tennis league and bridge club for many years. She also loved animals and nature. In later years, she became a member of the Hearing Loss Association of America and was an advocate for those with hearing loss. Survivors are her son, Thomas E. Ansley, Jr. and a daughter-in-law, Frieda Ansley of Jacksonville, Florida and a daughter, Anna A. Spence and son-in-law, Stacy Spence of Statesboro, GA, grandchildren Will Ansley of Tifton, GA, Forrest Spence, Page Spence and Bo Spence of Statesboro, GA, one sister, Bonnie W. Grist, and brother-in-law, Fred Grist of Statesboro, GA, nieces Bonnie G. Johnson and Mari G. Hopkins of Statesboro, GA and nephew Bo Grist of Charlottesville, Virginia. There will be a private burial. The visitation will be held on Monday, April 25 from 4:00pm to 6:00pm at Joiner-Anderson Funeral Home. The family requests that memorial contributions be made to Ogeechee Area Hospice, P.O. Box 531 Statesboro, GA 30459. Friends may sign the online register book at www.joineranderson.com Joiner-Anderson Funeral Home & Crematory of Statesboro is in charge of the arrangements.

The family of Ms. Willette Woodcock Ansley created this Life Tributes page to make it easy to share your memories.

Send flowers to the Ansley family.