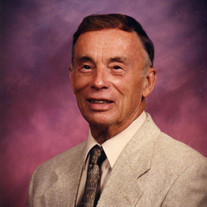 Statesboro, GA Mr. William R. Barnes, age 94 passed away on April 14, 2021 at Statesboro, Georgia. He was born August 11, 1926 in Lancaster, Pennsylvania, a son to the late Walter and Helen (Engle) Barnes. Bill was a veteran of the U.S. Navy. He was serving on a destroyer escort as World War II ended and then was assigned to a military government unit on Yap Island in the Pacific until June 1946. He graduated with a Degree in Forestry from the University of Georgia in 1950. His first position in forestry was with the Georgia Forestry Commission and then in 1957 accepted a job with Owens-Illinois, Inc. in Milledgeville as tract manager and later retired as a procurement forester in 1982. Following his retirement, he and his wife, Sara, spent many years commuting from Milledgeville to Fripp Island, SC where they built a beach house. They enjoyed fishing, shrimping, and sharing their second home with friends and relatives. In addition, as a hobby he spent many hours building and repairing furniture in his basement work shop. He was preceded in death by his wife Sara McMurry Barnes. Surviving are his daughter Beverly Johnson and her husband Jeff of Brooklet, GA; a son William R. Barnes, Jr. and his wife Gerrie of Johns Creek, GA; three grandchildren Maggie Johnson of Savannah, GA, Brett Johnson of Sykesville, MD and Ashley Barnes of Buford, GA; two great grandchildren Andy Johnson and Chelsea Johnson of Sykesville, MD. The family would like to express their appreciation to the employees at Bethany Lodge and to the employees at Ogeechee Area Hospice. A private funeral service and burial will be held at Memory Hill Cemetery in Milledgeville, GA. The family requests that memorial contributions be made to The Lodge at Bethany Education Fund 77 Briarwood Rd. Statesboro, GA 30458 or to Ogeechee Area Hospice, P.O. Box 531, Statesboro, GA 30459. Friends may sign the online register book at www.joineranderson.com. Joiner-Anderson Funeral Home & Crematory of Statesboro is in charge of the arrangements.

Statesboro, GA Mr. William R. Barnes, age 94 passed away on April 14, 2021 at Statesboro, Georgia. He was born August 11, 1926 in Lancaster, Pennsylvania, a son to the late Walter and Helen (Engle) Barnes. Bill was a veteran of the U.S. Navy.... View Obituary & Service Information

The family of Mr. William R. Barnes Sr created this Life Tributes page to make it easy to share your memories.

Send flowers to the Barnes family.