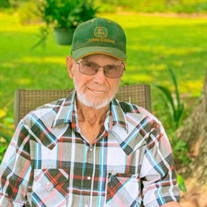 Statesboro, Georgia Mr. William C. Perkins, “Bill”, age 84, died Thursday morning at the Ogeechee Area Hospice Inpatient Facility in Statesboro. The native and lifelong resident of Bulloch County was a 1955 graduate of Marvin Pittman High School. He was employed with Brooks Instrument for 30 years, retiring in 1998. Following his retirement, Bill continued working for Bulloch County Recycling center for 20 years. He was also a lifelong farmer. Bill served for 12 years in the Army National Guard. He was a member of Eastern Heights Baptist Church where he was a member of the Jeff Owens Sunday School Class. He was a member of the Rusty Relics Tractor Club. In his spare time, Bill enjoyed being outside, traveling and camping, and tinkering with his tractors. His family was his world and he loved them all dearly. Bill was preceded in death by his parents, William Sydney Perkins and Louise Dasher Perkins. Surviving are his wife of 60 years, who he would have celebrated 61 years of marriage on July 23rd, Jeanette Barnwell Perkins of Statesboro; a daughter and son-in-law, Teresa and David Tucker; two sons and a daughter-in-law, Tommy Perkins and Keith and Shelia Perkins all of Statesboro; his grandchildren, Brittany Tucker of Nashville, TN, Jennifer Tucker, Casey Perkins, Ben and Anna Perkins and Preston and Casey Moore all of Statesboro; three great grandchildren, Samuel Perkins, Preslee Moore and Jackson Moore; his beloved Dog Turner, that he loved to share ice cream with; a sister and brother-in-law, Marilyn and Earl Best of Savannah and several nieces and nephews. The family will receive visitors on Saturday from 9:00am until 11:00am at Joiner-Anderson Funeral Home in Statesboro. Funeral services will follow the visitation at 11:00am in the chapel of the funeral home with Rev. Nicki McCleary officiating. Interment will be in Bulloch Memorial Gardens. Pallbearers will be Casey Perkins, Ben Perkins, Preston Moore, Chucky Barnwell, Ray Robbins, and Richard Best. Honorary Pallbearers will be members of the Jeff Owens Sunday School Class and members of Rusty Relics Tractor Club. The family requests that memorial contributions be made to Eastern Heights Baptist Church, 23805 Hwy 80 East, Statesboro, Georgia 30458 or Ogeechee Area Hospice, P.O. Box 531, Statesboro, Georgia 30459. Friends may sign the online register book at www.joineranderson.com. Joiner-Anderson Funeral Home & Crematory of Statesboro is in charge of the arrangements.

The family of Mr. William "Bill" C. Perkins created this Life Tributes page to make it easy to share your memories.

Send flowers to the Perkins family.