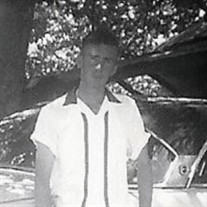 William Victor Lancaster 1928- 2022 William Victor Lancaster, 93, passed away peacefully on January 13, 2022, at Ogeechee Area Hospice in Statesboro, Georgia. He was born May 4, 1928, in Adrian, Georgia, to the late George Washington Lancaster and Annie Mae Webb Lancaster. He spent much of his childhood in southwest Georgia, and when he was a teenager, his family moved to Newington, Georgia, where he finished high school. He then attended Georgia Teachers College, majoring in electrical engineering. On December 31, 1950, he married his high school classmate, Annabelle “Bella” Hodges. Soon after, he was drafted into the United States Army, where he proudly served his country during the Korean War. After he returned from the War, he resumed his career as an electrical engineer, working in South Dakota, wiring missile silos, which is now known as The Minuteman Missile National Historic Site. Upon returning to Georgia, he worked for Rollinson Electrical Contractors until his retirement in 1992. He was the oldest member of the International Brotherhood of Electrical Workers Local 508, and recently received his 65 Year Service Pin. He attended Newington Baptist Church until his health declined. He was a perfectionist and a master craftsman, artist, and excelled in technical drawing, and lettering. He enjoyed fishing and boating and was an avid hunter. He loved animals, adopting many stray cats and dogs through the years. In addition to his parents, he was preceded in death by his wife of 60 years, Bella. He is survived by his daughter and her husband, Christy and Reggie Jackson, a brother-in-law, Roger Macomber, nieces Pamela M. Wells (Elry), Lisa M. Gross (Johnny), and Mandee Macomber, grandnieces and nephews, Seth, Marcia, and Nate Wells, Eve, Jake, and Kurstin Barnes, Timothy Wells, Nic and Becca Gross, and Lucie Macomber. Also surviving are a special brother-in-law and sister-in-law, Bill and Helen Macomber, and several cousins. He also leaves behind his beloved pets, Puff the Cat, Tommy Cat, and his dogs, Socks, Tom, Dick, Harry, and Jane. Due to the pandemic and the surge of Covid cases, a private graveside service and burial will be at the Newington City Cemetery, a private family gathering will be held in the future. The family encourages everyone to please be cautious and consider the safety of your own loved ones during this current health crisis. The family would like to express their appreciation to Kindred Home Health Care, Bethany Hospice and Palliative Care, and Ogeechee Area Hospice. Also, Dr. Hiem Thong and staff of Southcoast Health, and Dr. Mark Jenkins of Cardiovascular Consultants, for the excellent care they provided for our loved one through the years. Most especially, we thank Ralph and Alan and our friends at Southern Manor for their kindness and compassion, and for taking such wonderful care of our loved one and providing such a lovely home for him these past four years. You have all been such a blessing to us. In lieu of food and flowers, the family suggests memorial contributions be made to Ogeechee Area Hospice, P.O. Box 531, Statesboro, Georgia 30459, Bethany Hospice and Palliative Care, 109 S. Duval St., Claxton, Georgia 30417, or Newington Baptist Church, P.O. Box 158, Newington Georgia, 30446, or to a charity of your choice. Another way that you may honor him, and our fellow man is to get vaccinated and boosted, and to wear masks, and practice social distancing. “Weeping may endure for a night, but joy cometh in the morning.”- Psalm 30:5 Friends may sign the online register book at www.joineranderson.com. Joiner-Anderson Funeral Home & Crematory of Statesboro is in charge of the arrangements.

The family of Mr. William Victor Lancaster created this Life Tributes page to make it easy to share your memories.

Send flowers to the Lancaster family.