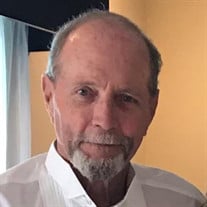 William Thomas “Tommy” Lee passed away Monday, April 11, 2022 at the age of 74. Tommy was born and raised in Savannah, Georgia and graduated from Savannah High School in 1966. He was the owner and operator of Lee’s Bakery. Tommy moved to Bulloch County in 1981 and began working for Georgia Southern University as food service administrator, retiring after 27 years of service. His passion was food and cooking. He served in many branches of the military which included the Army, Air Force and the Georgia National Guard. Tommy loved gardening and growing flowers. He was a man of many talents, a history buff, loved singing and especially loved karaoke. He was a member of the Statesboro Moose Lodge 1089, Chatham Artillery, American Legion, Georgia Department of Natural Resources Wildlife Resources Division. Tommy was preceded in death by his parents Thomas and Fannie Gann Lee. Tommy is survived by his wife Cecelia Lee, his children Deryle T. Lee (Betty Jean) of Brooklet, and Gina L. Futch of Brooklet, stepsons Rodney Lamer Gordon Jr. (Meagan), Ellsworth Riley Brown III (Ashley); grandchildren Dylan Lee, Jared Futch, Emmalee and Bella J. Gordon and Worth, Wyatt, Waylon and Wesley Ann Brown. He is also survived by his sister Diane L. Blair (Olan) of Franklin, NC, and his brother David S. Lee (Elizabeth) of Brooklet, the mother of his children Linda A. Lee and several nieces and nephews. Visitation will be held at Joiner-Anderson Funeral Home Friday, April 15, 2022, from 1:00 pm to 2:00 pm followed by a service with military honors at 2:00pm in the chapel. A private family burial will be held at Bulloch Memorial Gardens. Friends may sign the online register book at www.joineranderson.com Joiner-Anderson Funeral Home & Crematory of Statesboro is in charge of the arrangements.

The family of Mr. William Thomas "Tommy" Lee created this Life Tributes page to make it easy to share your memories.

Send flowers to the Lee family.