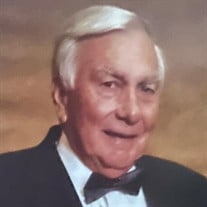 Dr. Willie I. (Bill) Golden Dr. Willie I. (Bill) Golden, age 85, passed away peacefully Sunday morning, April 24, 2022, at Ogeechee Area Hospice in Statesboro, GA, after a brief illness. Bill was born November 17, 1936, in Wilkinson County, Georgia. He graduated from Sandersville High School in 1954, where he was elected president of his junior class and served as captain of the high school football team. He began his undergraduate education at Middle Georgia College. His leadership skills were again recognized as he was elected president of the student body, captain of the football team, and was voted Mr. Freshman and Mr. Middle Georgia College. Bill transferred to the University of Georgia and earned a B.S. degree in Agricultural Economics and Extension Education in 1958. He completed his post-graduate education by earning his M.S. at the University of Georgia and his Ph.D. at Texas A&M University in 1968. Dr. Golden spent his entire profession in the fields of economic development and higher education. He began his career as an assistant county agent in Twiggs County, Georgia, followed in 1961 by many years in leadership positions with the UGA Cooperative Extension Service and extension agricultural programs at Clemson University. It was during this time that Bill developed a state-wide network of contacts that were instrumental in his success during the second half of his professional career in higher education. In 1989, Bill became Director of Corporate and Foundation Relations at Georgia Southern University. His role expanded in 1991, when he was appointed Director of Governmental Relations at Georgia Southern, as well as President of the Georgia Southern University Foundation and Director of Development. After Bill retired from Georgia Southern in 2007, he was honored with a Resolution from the State of Georgia House of Representatives, the State of Georgia Senate, and the United States House of Representatives, for his long service in promoting economic development throughout the state and his work with higher education. During Bill’s long and distinguished career, he was a member of many economic development and higher education professional and state organizations. Locally, Bill was a member of the Rotary Club of Statesboro, served on the Statesboro-Bulloch County Chamber of Commerce Board of Directors, and co-chaired the Georgia Tech – UGA Development Fund in the Statesboro area, as well as chaired the University of Georgia Bicentennial Committee in Bulloch County. He was a member of Statesboro First United Methodist Church. Bill loved spending time with his family. He enjoyed his time spent with his son, Jeff, fishing and time spent with his daughter, Jennifer, in the mountains. A true friend and Southern gentleman in every sense, Bill was a loyal Georgia Southern Eagles and University of Georgia Bulldogs fan. He started his mornings with his coffee club at the Country Store, where the problems of the world may not have been solved, but they were definitely discussed with great enthusiasm. He loved to go fishing with his long-time buddies, and many of his friends were fortunate enough to be treated to one of his fabulous fish fries. He enjoyed playing tennis and his monthly meetings with his fellow Tipplers. Bill was married to the late Dorothy Smith Golden for 42 years. They had two children, Jennifer and Jeff. Several years after Dorothy’s passing, Bill married the late Julie Morris Golden. The last 10 years of Bill’s life were happily spent married to Dr. Barbara Christmas Golden. Barbara and he enjoyed their daily conversation on their back deck with each other and friends. In addition to Dorothy Golden and Julie Golden, he was preceded in death by his parents, Farmer Golden and Lorene Lord Golden. His sister, Jean Perdue, brother and sister-in-law, Jamie and Betty Golden, and step-grandson Michael O’Donnell. Bill is survived by his wife Barbara Christmas Golden, daughter Jennifer McClellan (Doug), son Jeff Golden (Lyn), step-daughters Holly Durrence (Lew), Joy Howard (Shannon), Sarah Beverley (Keith), Patti O’Donnell (Bruce), and Connie Brannen, nine step-grandchildren, six step-great-grandchildren, his sisters Harriett G. Amerson, Jenny Boatright and Jane Aarata. A visitation will be held on Wednesday at Joiner-Anderson Funeral Home from 1:30 p.m. until 3:00 p.m. followed by a service in the Chapel of Joiner-Anderson at 3:00 p.m. with Dr. John Waters officiating assisted by Dr. Russell Keen. Memorial contributions may be made to the “Bill Golden Memorial Scholarship,” Georgia Southern University Foundation, P.O. Box 8053, Statesboro, GA 30460 or GeorgiaSouthern.edu/alumni/GoldenScholarship Honorary pallbearers will be the members of the Country Store Coffee Club and the Tipplers Club. Services are streamed using Facebook Live through a private group. Only members of the group will be able to view the service. In order to view the service, log into Facebook on your phone or computer and join the group “Joiner-Anderson Live Stream” at: https://www.facebook.com/groups/jafhlive/ If you have any questions; please contact the funeral home @912-764-7725. Friends may sign the online register book at www.joineranderson.com . Joiner-Anderson Funeral Home & Crematory of Statesboro is in charge of the arrangements.

The family of Dr. Willie (Bill) I. Golden created this Life Tributes page to make it easy to share your memories.

Send flowers to the Golden family.