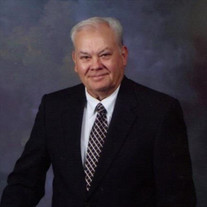 Statesboro, Georgia Mr. Wyman M. Hendrix, 84, peacefully passed away on Friday, February 12, 2021 at Ogeechee Area Hospice Inpatient Facility. Wyman was born May 25, 1936 on the Hendrix Family farm to Leonard Lee (Son) and Lillie Mae Smith Hendrix. He was a 1954 graduate of Statesboro High School. Wyman was employed by Brooks Instrument for 42 years. He lived and farmed in the Middleground Community. Wyman was a faithful deacon and member of Bethlehem Primitive Baptist Church. He was preceded in death by his parents, two sisters Roberta Neal and Willa Lee Waters, and two brothers J.L. Hendrix and Earl Hendrix. He was also preceded in death by his son-in-law Don Ray Newton. Mr. Hendrix is survived by his wife of 63 years, Delois Jones Hendrix. He is also survived by his children, Kathy Newton of Statesboro, GA and Kasey Hendrix of Hawkinsville, GA; four grandsons-John Douglas Newton, Benjamin Newton, Brooks Hendrix and Joshua Hendrix. Visitation will be Sunday, February 14, 2021, from 4:00-6:00 p.m. in the chapel of Joiner Anderson Funeral Home in Statesboro. Funeral services will be Monday at 11:00 a.m. at Bethlehem Primitive Baptist Church with Elder John Scott officiating. The body will lie-in-state at the church one hour prior to the service. For those desiring view services via livestream may do so by joining the group “Joiner-Anderson Live Stream” at: www.facebook.com/groups/jafhlive/. For those attending that would prefer to remain in their automobiles, may tune in to the service for onsite radio broadcast on 88.1 FM. Interment will be in the church cemetery. Pallbearers will be Shelton Waters, Dennis Waters, James Hendrix, Lavan Hendrix, Johnny Neal and Travis Fordham. Honorary Pallbearers will be the Deacons of Bethlehem Primitive Baptist Church, Talmadge Jones, Frank Hodges, James Elton Lanier, Johnny Wilson and Raybon Anderson. The family requests that memorial contributions be made to Bethlehem Primitive Baptist Church, 210 Jonathan Road, Statesboro, Ga. 30458 or Ogeechee Area Hospice, P.O. Box 531, Statesboro, Ga. 30459. The family wishes to thank the nurses and staff of Ogeechee Area Hospice for the excellent care provided to Wyman. Friends may sign the online register book at www.joineranderson.com. Joiner- Anderson Funeral Home & Crematory of Statesboro is in charge of the arrangements.

The family of Mr. Wyman M. Hendrix created this Life Tributes page to make it easy to share your memories.

Send flowers to the Hendrix family.